Why would the Russian government bother to support left-wing regimes in Latin America to the detriment of Russia's relations with other countries? 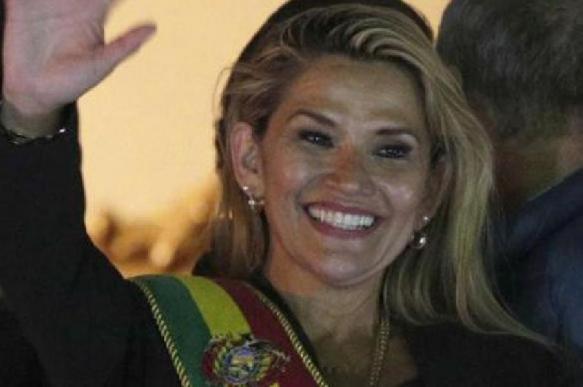 Russia recognized Jeanine Agnes, an opposition representative, the interim President of Bolivia. Agnes immediately recognized the government of impostor Juan Guaido in Venezuela, which Moscow does not recognize. Why would the Kremlin increase pressure on Nicolas Maduro and recognize Jeanine Agnes, a pro-American protege? She did not have the right to declare herself president - the parliament should have done that instead, and Evo Morales's party holds the majority in the parliament.

To keep it simple, it was not nice to recognize Agnes with regard to the former president of Bolivia, who supported Russia's initiatives and position on Ukraine to Syria at the UN Security Council (Bolivia is a non-permanent member of the UN Security Council). Evo Morales had also  recognized the Crimea referendum and independence of South Ossetia and Abkhazia. One may say that Morales stepped down at his own will, but this is not true to fact, because he attempted to return through new elections. To verify this, Putin could talk to Morales on the phone.

On November 10, the entire administration of Bolivia, including President Evo Morales, resigned amid protests in the country to avoid violence, including against government officials. Morales was granted political asylum in Mexico and announced from there that he would return to the country if the Parliament asked for it. Many of Bolivia's continent neighbors condemned the "coup d'etat."

Jeanine Agnes, second vice-speaker of the Senate, a representative of the opposition, announced that she temporarily takes over the powers of the head of state. The military expressed their support for her. Washington and Brussels supported Agnes as well.

Boris Martynov, the head of the Department of International Relations and Foreign Policy of Russia at the Moscow State Institute for International Relations, told Pravda.Ru that Russia's recognition of Agnes did not imply Russia's recognition of Guaido. "If we stick to such an absolutely uncompromising position, then Russia would have to terminate relations with all countries that recognize Guaido, for example, with Brazil, a BRICS member," the expert noted.

In his opinion, Russia's policies in Latin America had long been "ideologized", even after very serious changes in the region.

"The Russian government is a liberal one, but it supports left-wing regimes. We need to be more pragmatic in our relations with Latin America. We should not get attached to the countries that may support Russia verbally and sometimes in practice. In doing so, we put ourselves in opposition to other countries. This is not the right way to act," said Boris Martynov.

As for Bolivia Morales should have tried to find a successor after three terms in power. "Young people want change, they want adrenaline, they ant to take to the streets, to make some noise, even if there is no reason for it. The pace of Bolivia's development, its GDP growth, was one of the highest in Latin America," said Boris Martynov. "Bolivia needs stability because there is anarchy in the country. Agnes promised to hold elections, so we will see who is going to win them," the political scientist added.

There is the other side of the coin to the Bolivia story - the intervention of the United States.

"The USA intervenes and will continue to intervene into other countries' affairs. Leftist leaders of Latin American countries act is if they live on the Moon, rather than in USA's backyard. They need to learn to adapt themselves to circumstances. The USA will use any reason for an attack," Boris Martynov told Pravda.Ru.