Massive riots and protests are gathering pace in Iran after the authorities of the Islamic Republic admitted that it was an Iranian missile that shot down the Ukrainian jetliner. 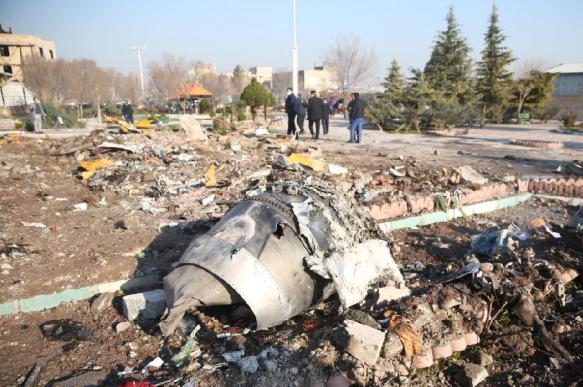 Rallies take place at universities in Tehran and several other cities of the country as protesters call for the resignation of Iranian officials behind the Ukrainian plane crash.

Students of two universities of Tehran started gathering on the central square of the city on January 11 to pay tribute to those killed in the plane crash. Later in the evening, young people clashed with the riot police causing the latter to use tear gas against the crowd.

A number of Iranian newspapers published reports from the scene under such headlines as "What a Shame!" and "We Will Not Forgive." However, some other media outlets praised the Iranian authorities for honestly acknowledging the mistake that led to the crash of the Ukrainian passenger plane.

Protests in Tehran continue despite the presence of special police units, as well as units of the Islamic Revolutionary Guards Corps (IRGC) in the streets of the city. As one can see from video reports, protesters defiantly refuse to trample on images of US and Israeli flags on the sidewalk at the entrance to the University of Shahid Beheshti in Tehran. When someone steps on the images of the flags, people in the crowd scream that they showed disrespect. The protesters chanted anti-government slogans, such as this one: "We are being lied to that our enemy is America, but our enemy is here!"

Clashes with security forces sparked on Tehran's Azadi Square. On January 12, many took to the street for demonstrations to condemn the killing of General Qasem Soleimani and express their disdain to the USA and the UK. US President Donald Trump stated that the Iranian authorities should not prosecute participants in anti-government protests. "To the leaders of Iran - DO NOT KILL YOUR PROTESTERS. Thousands have already been killed or imprisoned by you, and the World is watching. More importantly, the USA is watching. Turn your internet back on and let reporters roam free! Stop the killing of your great Iranian people!" Trump wrote on Twitter.

UK's Foreign Secretary Dominic Raab said Ambassador Rob Macaire was detained after attending a rally in memory of the victims of the plane crash, some of whom were British citizens. The ambassador himself said that he left the ceremony after some of its participants started chanting anti-government slogans, and did not take part in the demonstration.

Reportedly, a number of top Iranian civil and military officials have resigned from their posts. Among the resigned politicians are Eshaq Jahangiri Kouhshahi, first vice president and secretary of the National Security Council, as well as Ali Rabi, a spokesman for the Iranian government.

On January 8, 2020, a passenger plane of Ukrainian International Airlines crashed shortly after takeoff from the airport of Tehran. All 176 aboard were killed. Most passengers were Iranian and Iranian-Canadian nationals, the crew was Ukrainian. On January 11, Iranian military officials admitted that the airplane was shot down unintentionally. They claimed that the aircraft made a sharp turn towards a sensitive military base. However, it was later specified that the passenger aircraft was flying normally and did not make any sharp turns after takeoff. Amirali Hajizadeh, a senior Iranian Revolutionary Guards commander, said that he claimed full responsibility for the crash.