The "deal of the century" that was designed by Donald Trump and Benjamin Netanyahu for the regulation of the Palestinian-Israeli conflict is a worthless piece of paper the purpose of which is to grab media attention to improve the stained images of the two politicians, Vladimir Vasilyev, an Americanologist believes. 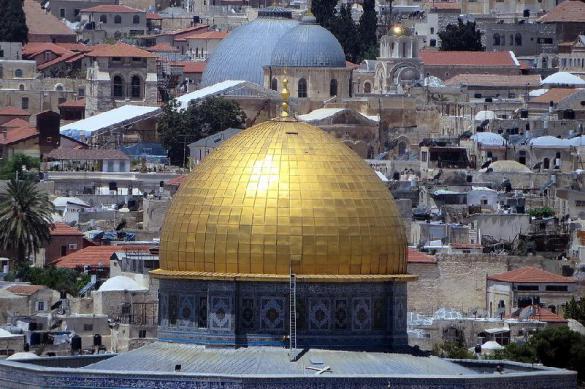 What the "deal of the century" is about

Donald Trump came up with a joint plan with Israel to create the independent state of Palestine, provided that the Palestinians recognize Israeli sovereignty over illegal settlements in the West Bank.

Trump stated during at a press conference in the White House, standing next to Prime Minister Netanyahu, that his proposals "could be the last opportunity" for the Palestinians.

"My vision presents a "win-win" opportunity for both sides, a realistic two-state solution that resolves the risk of Palestinian statehood to Israel's security," Donald Trump said.

"The deal of the century," as Trump described it, includes the following:

Palestine's reaction to the "deal of the century"

Mahmoud Abbas, the President of Palestine (which Israel considers its autonomy) rejected the plans as a "conspiracy."

"I want to say to Trump and Netanyahu -- Jerusalem is not for sale. All our rights are not for sale or for compromise. Your deal is a conspiracy and it will not work," Abbas said in a news conference in Ramallah in the West Bank.

"The Palestinian people deserve to live on their land," Abbas added.

"We tell the world: we are not terrorists and will never be them," he said.

Abbas also said that the Palestinians would immediately start taking steps to change the "functional role of the [Palestinian] administration" in order to implement the recommendations made by the institutions of the Palestinian Liberation Organization (PLO) over the past two years. Apparently, it goes about the efforts to stop cooperation with Israel in the field of security.

The union of two toxic politicians - Trump and Netanyahu

Vladimir Vasilyev, chief researcher at the Institute of the USA and Canada of the Russian Academy of Sciences, told Pravda.Ru that the peace plan per se is nothing but a worthless piece of paper. It appeared against the backdrop of the political situation inside the United States and in Israel, the expert said.

According to him, against the background of the impeachment process, Trump's peace plan is a form of gentle pressure on the Democratic faction in the Senate, taking into consideration the fact that main sponsor is the pro-Israeli lobby.

"The Democrats were told: You see, we accept your plans, we accept the resolution of the Palestinian problem on the principles of the two states, as was stated in the UN Security Council resolution from 1948, and in this regard our position today is no different from yours. Trump is a person who offers the deal of the century, and you want to impeach him," the expert said.

As for Netanyahu, the Prime Minister of Israel is facing severe problems in his homeland, where he faces charges of corruption. He may lose the post of the prime minister and appear as a participant in a criminal case.

According to the expert, as soon as the threat of impeachment goes, the Trump administration will quickly move away from this plan or let it drop under the pretext of the contradictory nature of Palestine. Netanyahu likes the idea too.

What the world thinks about the "deal of the century"

The Palestinians want the West Bank to be the core of a future independent state, and see Israeli settlements (nearly 500,000 Israelis) as an obstacles to their dream of independence. The international community supports this view and overwhelmingly considers Jewish settlements illegitimate. After the capture of the West Bank during the war in the Middle East in 1967, Israel has been expanding its settlements without reserving their annexation. The UN condemned the Jewish settlements as illegal, but refrained from imposing sanctions or severe penalties.

However, before the March parliamentary elections, Netanyahu's Likud party and the Blue and White party of his opponent, Benny Gantz, stated in their programs that they would extend the Israeli jurisdiction to the occupied lands, which, in essence, means their annexation.

Yuval Shany, an international law expert at the Israel Democracy Institute, said that the annexation would significantly increase the risk of the criminal prosecuton of Israel in the International Criminal Court (ICC). The court will view the settlements illegal on the basis of the Geneva Convention, according to which the occupying power is prohibited from moving its population to conquered territories.