Life after INF Treaty: The virus of war can never be killed

February 2, 2020 marked one year since the day when US President Donald Trump announced Washington's decision to suspend obligations under the Treaty on the Elimination of Intermediate-Range and Shorter-Range Missiles (commonly known as the INF Treaty). This day also marked six months since the date of its final termination (August 2, 2019). 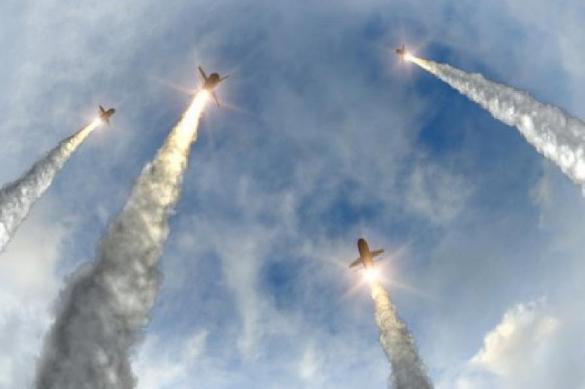 Over the past few years, the United States has been making thorough preparations to withdraw from the treaty. Back in 2014, the Capitol Hill was discussing allegedly reliable intelligence data about the Russian 9M729 missile (the modernized ground-based cruise missile of the Iskander-M system), which was supposedly violating the INF Treaty.

Russia received the first official accusation about its violation of the INF Treaty in a letter that Barack Obama sent to his Russian counterpart Vladimir Putin. Starting from October 2019, Washington's falsified arguments evolved into large-scale anti-Russian campaign in Western media.

Today it is clear that the USA was promoting its far-fetched theses to shift responsibility. At the same time, Russia's claims to the United States regarding the INF Treaty were purely  substantive.

To test prospective missile defense systems, the US armed forces actively use ballistic target missiles, such as Hera, Aries, Chimera and others. These missiles are actually medium-range ballistic missiles, the production and testing of which is prohibited by Article VI of the INF Treaty.

Washington has been holding such tests since 2001 (more than 100 tests have been conducted to date). Their chronicle is available on the Pentagon's Missile Defense Agency's website www.mda.mil (access to the site from Russian IP addresses was closed after Vladimir Kozin, an expert at the Center for Military-Political Studies of the Moscow State Institute of International Relations and Foreign Affairs, referred to the site for evidence of Washington's violations of the INF Treaty).

In the text of Article II of the INF Treaty, the term "cruise missile" refers to an unmanned vehicle equipped with its own propulsion system, the flight of which for most of its trajectory is achieved through aerodynamic lift. This term is fully applicable to USA's MQ-1B Predator and MQ-9A Reaper drones, having a range from 500 to 5500 km.

The Americans shrugged off the Russian claim by saying that the qualitative structure of arms has changed and that there was no such class of weapons as UAVs in 1987.

The ground launch systems used to launch the Standard-3 anti-missiles are identical to deck-based Mk-41 missile launchers that are capable of launching not only similar missiles, but also Tomahawk cruise missiles. The deployment of Mk-41 launchers as part of the Aegis Ashore system on land directly violated the provisions of Article VI of the INF Treaty.

In response to the Russian arguments, Washington objected that launchers of the missile defense system had structural changes that made them not quite identical to the Mk-41, that they were unable to launch cruise missiles.

The test of the ground-based cruise missile (CRNB), which the Americans conducted on August 18, 2019, two and a half weeks after its termination, clearly demonstrated Washington's two-facedness. The ground-based Mk-41 could always launch the Tomahawks. Moreover, on May 12, 2016, they were deployed at Deveselu air base in Romania and were capable of hitting Russian targets back then.

Why the INF Treaty was important

The INF Treaty was the only fully implemented arms control treaty. From the time of its signing to the control date in 1991, 1б846 Soviet and 846 American missiles with a range from 500 to 5,500 km had been destroyed - all of them being medium and shorter-range land-based missiles. Both the USSR and the USA had been completely satisfied with the implementation of the Treaty by that time.

Along with the Treaty on the Limitation of Anti-Ballistic Missile Defense (ABM Treaty) and the Treaty on Measures to Further Reduce and Limit Strategic Offensive Arms (START), the INF Treaty was one of the key elements of a system, the development of which took decades.

The Russian side sought to preserve the INF Treaty until the last moment. In response to absurd arguments from the Americans, Moscow made a move that was unprecedented in its transparency. On January 23, 2019, a joint briefing of the Ministry of Defense and the Ministry of Foreign Affairs of Russia was held in the Patriot Park to demonstrate key tactical and technical characteristics of the 9M729 missile, as well as peculiarities of its operation and use.

Despite the maximum openness of the Russian side, representatives of the United States and a number of Western allied states refused to attend the briefing. They did not even try to pay attention to Russia's arguments, because the fate of the INF Treaty had already been decided by that time.

The USA's pullout from the Treaty triggers erosion of other disarmament agreements - START III and the Open Skies Treaty.

The creation of nuclear weapons in 1945 made the United States a monopolist in the global projection of force. The hopes of the world community that the 1945 Yalta Conference would create a solid foundation for post-war peace and stability failed to materialize.

Fearing the spread of socialism in Europe and the USSR's dominance on the Eurasian continent, General Dwight Eisenhower's headquarters, by personal order from US President Harry Truman, developed the "Totality" plan, which stipulated for the atomic bombing of 17 major Soviet cities. The plan was developed in 1945 too.

In 1949, the Dropshot plan included 300 nuclear bombs for the USSR. Winston Churchill's famous Fulton speech in March 1946, the establishment of NATO in April 1949 and Truman's signing of the directive for the deployment of American nuclear weapons in Europe in September 1950 finally buried the plans for post-war cooperation of the Big Three.

The creation of the atomic bomb in 1949 and then the hydrogen bombs in 1953 in the USSR became a cold shower for the United States. The 1962 Caribbean crisis, which brought the world to the brink of a global nuclear war, gave rise to a large-scale anti-war movement and became a crucial moment. Many realized the perniciousness of the endless nuclear arms race.

The multilateral international act designed to limit the circle nuclear was developed by the UN Disarmament Committee. It was signed on July 1, 1968 and entered into force on March 5, 1970.

The treaty establishes that a state possessing nuclear weapons is a state that could produce and detonate such a weapon or a device before January 1, 1967. There were five such countries:

The non-proliferation of nuclear weapons is monitored by the International Atomic Energy Agency (IAEA).

The USSR and the USA grew to develop balance in matters of strategic offensive nuclear weapons during the 1960s and the 1970s. This prompted Washington to sign agreements with Moscow to limit strategic weapons and missile defense systems:

Subsequently, the SALT treaties evolved into the START treaties, which heralded the transition from limiting the growth of strategic offensive arms to their reduction.

The Treaty on the Limitation of Anti-Ballistic Missile Defense, signed on May 26, 1972, obliged the USSR and the United States to abjure the creation, trials and deployment of sea-, air-, space-based or mobile-ground missile defense systems or components to combat strategic ballistic missiles.

Each side pledged to have no more than two missile defense systems (around capital cities and in the area where the launchers of intercontinental ballistic missiles are concentrated), where no more than 100 launchers could be deployed within a radius of 150 kilometers. Subsequently, in July 1974, a protocol to the ABM Treaty was adopted that permitted one such system (for the USSR - with a center in Moscow, for the USA - in the state of North Dakota).

On December 13, 2001, US President George W. Bush announced Washington's unilateral withdrawal from the Treaty, but it remained in force for another six months.

According to both Russian and foreign military experts, the deployment of the global US missile defense system creates an illusion of impunity for the American leadership and undermines foundations of strategic stability, which provides for parity in strategic offensive weapons.

Having signed the START-I Treaty on July 31, 1991 in Moscow, the USSR and the USA, agreed to cut their nuclear arsenals so that each side would have no more than 6,000 warheads. However, the word 'warhead' in the context of the treaty should not be taken literally: the B-1B bomber, capable of carrying up to 24 nuclear munitions, was counted as one unit.

Only six months after the signing of START-I Treaty, the Soviet Union ceased to exist. Four independent republics with nuclear weapons appeared on its territory: Russia, Ukraine, Belarus and Kazakhstan. In this regard, an additional agreement, known as the Lisbon Protocol, was signed to supplement the treaty on May 23, 1992. As a result of its implementation, Russia remained the only nuclear power on post-Soviet space.

The START-II Treaty, ​​signed by Boris Yeltsin and George W. Bush on January 3, 1993, which prohibited the use of ballistic missiles with separable warheads, was never destined to be ratified by the Federal Assembly of the Russian Federation due to conditions that were unfavorable to Russia.

The START III Treaty, which currently remains in force, was signed by Dmitry Medvedev and Barack Obama on April 8, 2010 and entered into force on February 5, 2011. The document remains valid for ten years.

The main instrument for mutual control over the execution of the contract is inspection.

According to available information, Russia currently has 816 units of strategic offensive weapons, while the United States has 930.

The future of the START III Treaty is unclear. Donald Trump and his administration continue speculating on uncertainty about the feasibility to extend this agreement. US officials voice statements about the inappropriateness of any further disarmament agreements between the United States and Russia without giving them a multilateral status with the involvement of China in the first place as China had repeatedly voiced its negative position on the issue.

In the event the action of the START III Treaty is not prolonged, Russia and the United States will find themselves in the brave new world already in February 2021. They will have legal obligations to limit strategic offensive arms.

Russia should certainly strive to maintain the international arms control system, albeit not at all costs.

Fueling the uncertainty surrounding the extension of the START III Treaty, the United States seeks to achieve most favorable conditions for itself. For example, the USA wants to see the new START IV Treaty regulating Russia's state-of-the-art nuclear arms, which Putin announced in his Address to the Federal Assembly on March 1, 2018.

The Sarmat intercontinental ballistic missile will fall under the new START Treaty. At the same time, the Kinzhal (Dagger) aviation missile system, the Avangard hypersonic gliding vehicle, the new unmanned underwater vehicls and laser weapons cannot be related by this agreement.

The Russian military doctrine remains defensive. Russia develops new weapons in an asymmetric response to US attempts to consolidate its global dominance in the world.

There can be no winners or losers in a nuclear war. The Russian Federation will continue its policy of containment, showing maximum wisdom, foresight and deliberation. We would like to see our American partners doing the same.