Evo Morales should sue USA and Trump for the color revolution

Researchers from the Massachusetts Institute of Technology proved that there was no fraud during the presidential election in Bolivia last October, which suggests that the USA orchestrated a color revolution in Bolivia, a country that is an ally of Russia. 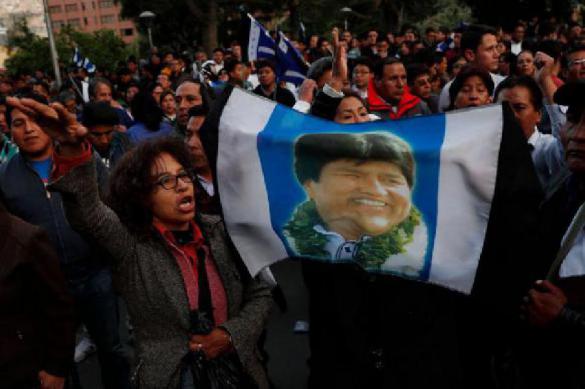 Victory of Evo Morales in the first round was legal

A new study published by the Massachusetts Institute of Technology (MIT) concludes that Evo Morales's victory in the first round was legitimate. The result contrasts sharply with the findings made by the Organization of American States (OAS) and comes contrary to remarks from US officials, who claimed that there was clear evidence of "deliberate manipulation" by the Morales government, which subsequently led to his resignation under pressure from the military and escape abroad.

According to the Bolivian election law, a candidate needs to win either by an absolute majority or gain at least 40% in order to win in the first round. However, in this case, the winner must be at least 10 percent ahead of the rival. Otherwise, the second round has to be arranged.

How Morales was toppled

In October 2019, during the electronic "quick counting" at 84% of the votes counted, the results showed that Morales was 8 points ahead of his closest rival Carlos Mesu. At this point, the election commission stopped updating the results for technical reasons (the system "froze").

While the election commission was processing the protocols, the OAS issued a statement expressing "deep concern" about the allegedly "hard-to-explain" leadership of Evo Morales after the quick vote count was suspended. The statement implied that the results were fraudulent. Foreign ministries of Colombia, Argentina, Brazil and the United States were quick to join the "concerns."

Commenting on the OAS statement, Western media around the world deliberately "confused" the quick calculation with the official results of protocol processing.

Protests erupted in the country, which eventually forced Morales to step down on November 10.

According to MIT, the analysis of the growth in the number of votes indicates a high probability that Morales exceeded the difference of 10 percentage points.

Morales' leadership did not grow sharply. It was actually steady and gradual. The increase was not hard-to-explain - it was quite predictable, given that the last results came from rural areas where Morales was especially popular, the researchers said.

In addition, the researchers conducted about 1,000 voting simulations to predict the final scenario, and concluded that Morales could have expected an advantage of at least 10.49 points against his direct competitor."

In a December interview with The Globe Post, Jake Johnston, an analyst at the Washington-based Center for Economic and Policy Research (CEPR), said that the OAS receives about 60 percent of its budget from the United States. Naturally, they had to work for that money accordingly, and so they did

The "color revolution," which the United States carried out in Bolivia under the cover of the OAS, led to weeks of violence, terror and unrest, which led to the toppling of the legitimately elected President Evo Morales.

At least 34 members of the electoral courts (commissions) were arrested for fraud in the following days.

Being an ally to the President of Venezuela, the Donald Trump administration saw Morales as a geopolitical opponent. Trump "welcomed" the toppling of Morales as "an important moment for democracy in the Western Hemisphere."

Morales was granted asylum in Argentina. Russia recognized Agnes, and, in fact, betrayed an ally, because Bolivia always voted as a non-permanent member of the Security Council for Russian resolutions, while Morales supported the independence of South Ossetia and Abkhazia and the "Crimean spring."

Evo Morales was the first president from the indigenous population of Bolivia, he made a significant economic growth possible during over almost 14 years in office.

His fourth presidential term, which was not stipulated by the Constitution, caused controversy, but, apparently, his party, Movement to Socialism, has not lost its influence among the population.

Bolivia is currently preparing for new elections on May 3. Recent opinion polls show that Luis Arce, a candidate from the party of Evo Morales, is far ahead of Agnes and other right-wing candidates.

The United States should be sued

Why don't Morales sue the Trump administration when he returns to power? Nicaragua used to sue the USA in 1984 for supporting the "Contras" after the toppling of dictator Anastasio Somoza.

In 1986, a UN court issued a verdict saying that the United States violated international legal obligations:

The court even awarded compensation to the Nicaraguan side, but the pro-US government that came to power in Nicaragua did not ask for it.