Erdogan acts as advocate of Western architects of Syrian crisis

The slogan "Assad must leave" is perhaps the only point of contact between the United States and Turkey. The support for Syrian Kurds is unacceptable for the Turks. Turkey's military operations in northern Syria inflicted serious reputational damage on Washington, indicating its inability to support its allies. The Turkish leader repeatedly demonstrated that he can disregard the most influential partner in the North Atlantic Alliance. 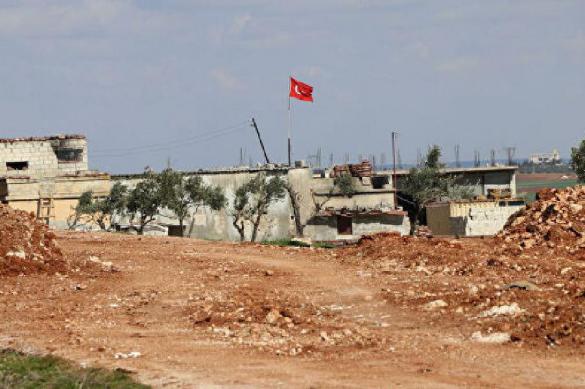 In the autumn of 2015, when Bashar Assad turned to Russia for military help, about 70% of his country's territory was controlled by ISIS* terrorists.

Over the four years of the military operation in Syria, the state of affairs has changed dramatically. The Islamic State* was completely driven out of the country, most of the country's territory and the vast majority of settlements remain under the control of government forces.

The success of the Syrian army would not have been possible without the support from the Russian Air Force, which destroyed more than 120,000 objects of terrorists. The Center for the Reconciliation of the Warring Parties (CRWP) - a unique Russian military organization conducting negotiations between the conflicting parties - has contributed a lot to take Syria out of the crisis as well.

Erdogan does not hide his support for Syrian terrorists

It was CRWP specialists, who managed to convince a significant number of opposition groups to stop cooperating with terrorists, negotiate with the official authorities and regulate their status.

Syria's Idlib province, bordering on Turkey, was destined to become a haven for gangs of all kinds. Since March 2015, Jabhat al-Nusra* and affiliated gangs have been reigning supreme in Idlib. In 2016, its leaders announced the formation of the Jabhat Fath al-Sham* alliance, which was renamed a year later to the Khayyat Tahrir al-Sham*. The group was renamed, but the ideology remained the same - they are still terrorists of Jabhat al-Nusra*.

The constant influx of new groups evacuated as a result of the reconciliation of an increasing number of settlements, raised the level of violence and inter-ethnic strife in Idlib. Islamist groups fight for power and try to establish control over financial channels. They share common hostility both to the Syrian government and ISIS*, while demonstrating loyalty to Turkey.

Despite the fact that even the United States and other NATO members recognize Khayyat Tahrir al-Sham* as a terrorist organization, Turkey's Erdogan supports the group and does not even try to hide it.

Erdogan's recent actions indicate his confidence that Russia will refuse to support the Syrian government forces in active operations against the Turkish army. At the same time, his readiness to take a serious political risk is striking, given the complicated domestic political situation inside Turkey.

The radical decision of the Turkish leader to use his troops in a neighboring state may have other reasons that cast doubt on Erdogan's political independence. He could be only an advocate of other architects of tensions in the Middle East.

Russia will not refuse to support the Syrian government. Russia and Turkey continue their cooperation in many areas of economy. The Russian market is strategically important for Turkish agricultural producers, while Russian tourists are strategically important for the Turkish tourist industry. It is about time the leaders of Russia and Turkey should sit down to negotiate to find a compromise.