Europe has taken a tough stance on the migration of refugees from Turkey. The "Australian scenario" of dealing with the problem is being discussed along with the closure of maritime borders. The best solution would be to stop supporting Recep Erdogan in Syria. 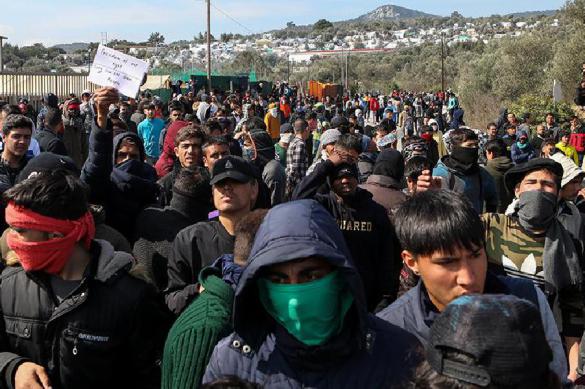 Mitsotakis noted that he was expecting tangible solidarity from the EU.

"The Turks sends thousands of people to the border to get what they want. Turkey uses refugees as geopolitical levers for its own purposes. Unfortunately, Turkey has become an official smuggler of migrants," Mitsotakis said.

Recep Erdogan ordered not to restrain refugees on the border with the EU after 35 Turkish soldiers died as a result of the air strike by the Syrian Air Force in Idlib province.

The Australians send refugee boats back or take them to internment camps in Nauru (a dwarf state) and Manus (part of Papua New Guinea).

To turn the boats back - for the majority of European authorities it seems to be highly intolerant. Where can Europe find an island that would be suitable for the purpose? In the Aegean? There are very tense relations with local residents there already - there were protests on the island of Lesbos.

The scale of the problem will continue to grow. In addition, in Australian camps, refugees have to live on the verge of survival with no prospects to enter Australia, which pushes refugees to return to their home countries. Europe is too tolerant to act that way.

Austrian social scientist and migration researcher Gerald Knaus sees a way out in a new deal with Turkey. The EU should pay Ankara billions of euros so that Ankara closes the border for four million refugees. The EU will accept a certain part of them in response. Proponents of this scenario say that if this is not done, then the scenario of 2015-2016 will repeat, and an avalanche of migrants (2 million people) will flow to Europe again.

This is catastrophically dangerous for Europe, as it has already led to the growing influence of the "populists", nationalists and Brexit.

Sea borders should be closed

The closure of maritime borders is also being discussed. Greece announced in early February that it would build floating fences. In front of the island of Lesbos, a three-kilometer barrier with flashing lights should be installed. If this obstacle proves to be successful, its length can be extended to 13-15 kilometers.

Of course, there are politicians who offer to accept everyone again, but this is practically impossible, either for political, economic or security reasons.