The COVID-19 epidemic is spreading faster in Spain than it is in Italy. Unlike in Italy, where 80% of infected patients die in the three most epidemiologically problematic regions (Lombardy, Emilia-Romagna and Veneto), the infection is actively spreading to autonomous communities in Spain, where it had not been detected before - in Catalonia, Castile and Leon, Castile la Mancha, Valencia and other regions.

On March 23, coronavirus killed 462 people in Spain. Over the next day, from Monday to Tuesday, another 514 died, which marked the largest number of deaths since the beginning of the epidemic in the country. 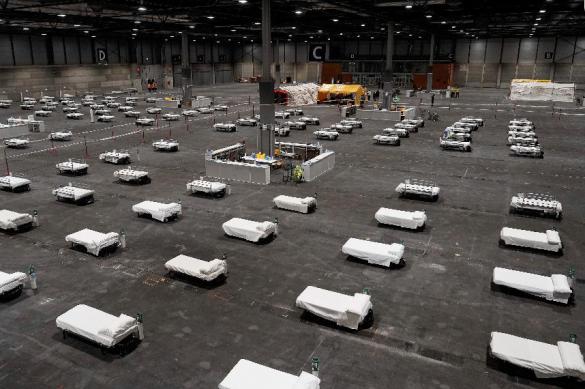 As of March 24, the number of patients, who were tested positive for COVID-19 infection in Spain reached 39,673 people, of whom 2,696 died. About 30,000 patients remain under medical supervision.

The authorities of Spain, where people over 65 years of age account for 18 percent of the population, declared a state of emergency on March 14. It will last at least until April 11th. All of Spain is quarantined, people are allowed to leave their homes only for urgent reasons. The epicenter of the epidemic is the autonomous community of Madrid, the center of which is the capital of the country. Up to 80 percent of residents may contract coronavirus there, Isabel Diaz Ayuso, the head of the government of the autonomous community of Madrid said.

Military men of the Spanish Armed Forces, who take part in operations to transport the bodies of the deceased and disinfect buildings, with ever increasing frequency find dead bodies of deceased elderly people in their apartments and nursing homes.

According to Defense Minister Margarita Robles, soldiers often come across bodies of abandoned elderly people who died in their beds.

The situation in many nursing homes in Madrid is critical. Personnel leave dead bodies untouched in their beads and wait for special services to arrive to pick them up. To make matters worse, many employees of nursing homes are either infected or remain in self-isolation.

Sixty percent of all critical patients in Spain reside in Madrid. Intensive care units are crammed with patients, many people are lying on the floor. Like in Italy, Spanish doctors give preference to those who have bigger chances to recover - younger individuals and those with fewer chronic diseases.

Spanish Healthcare Ministry ordered not to provide artificial respiration units to elderly coronavirus-infected patients, as their chances of recovery are minimal. Hospitals outside rarely have respiratory medical devices.

Sixty-eight percent of patients admitted to intensive care units are over 60 years of age. Of these, at least 25% die, Noticia website reports.

The exhibition complex became the country's largest intensive care unit - for 500 people. The complex is spacious indeed, which makes it possible to keep sufficient distance between the beds, which is important during a pandemic.

Forty hotels in Madrid now operate as hospitals. For example, the Gran Hotel Colon in Madrid provided 365 of its rooms to be used as hospital wards to help metropolitan hospitals to cope with the crisis

Madrid's Ice Palace now operates as a morgue, where they bring the bodies of the deceased. Bodies will be stored on ice rink until funeral services handle them.

Funeral service of Spain are not prepared for the pandemic. They have neither personal protective equipment (PPE), nor protective suits. Yet, Spanish funeral homes work as usual, dealing only with the bodies of those who died for reasons other than Covid-19.

Spanish epidemiologists, molecular biologists and other famous scientists - 69 specialists in total - wrote an open letter to the Spanish government on Saturday, March 21, urging the authorities for even tougher restrictions on the freedom of movement in the country. Otherwise, the Spanish health system will collapse on March 25, they wrote.

Spain implemented the state of emergency on March 14 - residents of the 47-million-strong country were ordered to leave their homes only in exceptional cases - to buy groceries, visit pharmacies, hospitals or to go to work. Violators face serious fines or even imprisonment.

In Russia, another 57 cases of the coronavirus infection were reported in Russia. All new patients have visited epidemiologically troubled countries in the last two weeks. The total number of patients with COVID-19 in Russia has thus reached 495.