On Monday, April 20, hundreds of residents of North Ossetia took to the streets for a spontaneous rally in front of the government building in Vladikavkaz, the capital of the republic. The people demanded the self-isolation regime should be lifted. Many also demanded the head of the republic, Vyacheslav Bitarov, to step down. 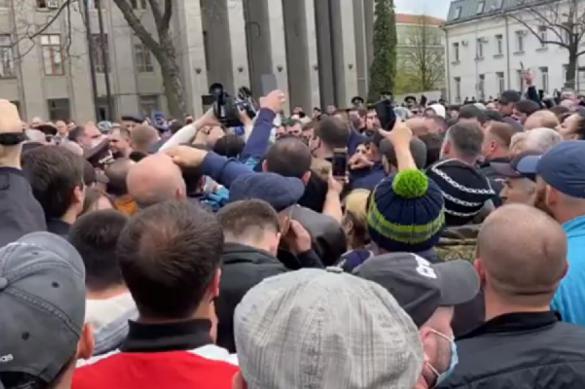 North Ossetia became the first Russian region, where protests against quarantine measures sparked. The rally on April 20 was not the first one: in early April, there were protests too, although they were not as large as on April 20 (according to various estimates, from 500 to 1,500 people gathered).

Although the rally has not been coordinated with the authorities, the latter did not dare to terminate the rally forcefully. Some time later, however, there were reports about clashes between the protesters and the police.

The head of the republic, Vyacheslav Bitarov, came out to the participants of the rally, who tried to explain the need for restrictive measures to the audience.

"It was not me who came up with this policy. There's only one remedy for this disease - to stay home," said Bitarov, addressing the people.

In response, many in the crowd wondered why Bavaria was still working.

Bavaria is a group of companies that deals from beer to concrete. The chair of the company is the son of the head of North Ossetia, Zelimkhan Bitarov.

"If someone proves to me that there is no coronavirus, I will open everything again," the head of the republic insisted.

"Corona-dissidents" and "citizens of the USSR"

One of the organizers of today's rally in North Ossetia is opera singer Vadim Cheldiev. The latter, in fact, resides in St. Petersburg. The singer does not believe in the existence of the novel virus, considers himself a citizen of the USSR, believes that Russian laws are illegitimate and urges people not to pay utility bills and loans.

Reportedly, law enforcement officers detained Cheldiev a few days ago. The protesters demanded Bitarov should release the opera singer, but the head of the republic redirected all questions to the republican Ministry of Internal Affairs.

However, one can hardly explain the riots in North Ossetia, a republic of the North Caucasus, with the power of the opera singer, who considers himself to be a Soviet, rather than a Russian citizen. The people took to the streets, because many of them were deprived of their income after the restrictive measures were introduced.

The authorities of the republic do not have any action plan. Even if they have one, it id not likely to be helpful, because the actions of the authorities of North Ossetia were too inconsistent. On the one hand, it is silly to deny the spread of the epidemic, and it was not Vyacheslav Bitarov, who came up with the idea of self-isolation.

On the other hand, they did not explain it to people what kind of help they could count on, how much time it would take, and why large shopping centers continue working, while small shops need to be closed. It remains unknown whether the authorities of North Ossetia can take control of the situation.