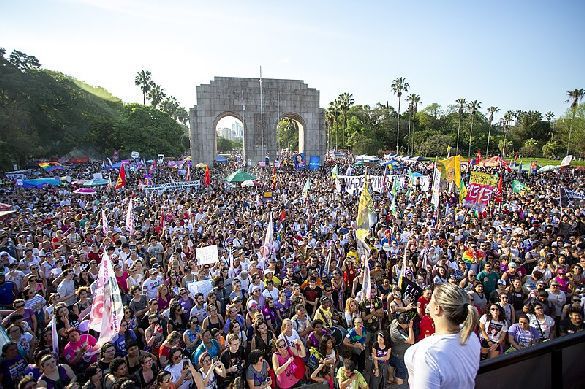 The United States has banned flights from Brazil as coronavirus cases and deaths have exploded in the South American nation, Latin America's most populous country with more than 212 million inhabitants.

Brazil, which accounts for roughly half the population of Latin America, registered  376,669 cases and 23,522 deaths up to May 25.

From Wednesday, May 27, citizens who have been to Brazil for the last 14 days cannot enter the US unless they stay at least 15 days in a country that has not banned their entry, for instance Mexico, to then travel to the North-American country.

As Brazil has overpassed 1,000 daily deaths of coronavirus, South America is the worldwide epicenter of the novel coronavirus according to the World Health Organization.

"Today's action will help ensure foreign nationals who have been in Brazil do not become a source of additional infections in our country," said the White House press secretary, Kayleigh McEnany, last Sunday, May 24, about the new travel restrictions that will not affect bilateral trade between the US and Brazil, she said.

Before the US ban announcement, Brazil's Foreign Minister Ernesto Araujo had said that Washington will send 1,000 respirators to his country, according to him part of "excellent cooperation between both countries," something not confirmed by the facts, as much as the sending of such medical supplies from the US to Brazil. On the contrary: the Trump Administration has restricted imports from Brazil, and there is no record of any cooperation with Brazil to date.

Coronavirus hit Brazil relatively late, but the country has now the second-highest infection rate in the world, and the sixth-highest recorded Covid-19 deaths. The number of deaths in the South American country is now doubling every two weeks compared with every two months in the hard-hit United Kingdom.

As Jair Bolsonaro's office declined to comment the US restriction, his foreign relations adviser, Filipe Martins, kept the Bolsonaro administration's hallmark of blaming others, especially journalists: "Ignore the hysteria of the press," the adviser said in a Twitter post in the following day to the White House announcement.

On the same day, a Brazilian woman said to President Jair Bolsonaro in the streets of Brasilia, that Brazil's Ministry of Communication should "do a better propaganda" of his government. Mr. Bolsonaro replied, saying that the "world media is leftist," a Bolsonaro Administration' endless attempt of creating imaginary enemies.

The world-renowned Brazilian Economist Ladisau Dowbor said to Pravda.ru that Mr. Bolsonaro is trying to violate the Constitution to achieve his goals, which are not to seek a solution to the pandemic nor to fix the national disastrous economy.

"The president is clearly attempting to get power instruments much beyond the Constitution and is daily claiming that the chaos we are living in is a result of his enemies who are tying his hands: the Congress, the Judiciary, the media, and of course communists, now resurrected for Bolsonaro's sheer necessity of having someone to blame," pointed out the expert based in Sao Paulo city.

A similar strategy of US President Donald Trump to divert attention, now blaming China, a so-called American enemy trumpeted by his administration, of producing the virus in a laboratory in Wuhan city, without any evidence about it.

Former Brazil's Minister of Foreign Affairs, Celso Amorim, said on Monday, May 25, that the banning of Brazilians from entering the North-American country, "is a demonstration of the total failure of a Brazilian foreign policy completely subservient to Washington."

Mr. Bolsonaro's popularity ratings in Brazil have tumbled, and are now below 30 percent. Some 50 percent of the Brazilian population disapprove of his handling of the crisis. Adding up to the terrific health crisis caused by the pandemic, Brazil faces a deep economic and political crisis, on the brink of a coup d'état by military allied to President Bolsonaro. There has been a social confusion, too, much likely never seen in the history of Brazil.

According to the French Author and Political Scientist Elodie Brun, an expert in Foreign Relations, Brazil's historically fragile democracy is running risk under Mr. Bolsonaro, who she considers responsible for the dramatic spread of the coronavirus throughout the South American country.

"Jair Bolsonaro's behavior is jeopardizing the Brazilian health system, and the protection of the Brazilians at the same time," told Pravda.ru the researcher at Colegio de Mexico.

"And the Brazilian democracy, as proved by the increasing presence of the military to manage the Covid-19 crisis," Doctor Brun added in an exclusive interview from Mexico City.

Doctor Dowbor, a political refugee in the years of Brazil's military dictatorship (1964-1985), agrees with Doctor Brun: "The generals in charge of the Army, Navy, and Air Force have jointly declared that they stand for democracy. When Latin-American generals claim that they will defend democracy, we should worry."

The decline in Brazil's gross domestic product this year could be around 4.5%, which would mark, according to Central bank data, the biggest annual fall in at least 50 years. The real is the currency that has faced the worst devaluation in the world in 2020, falling 45% against the US dollar.

Brazil's Federal Police incriminated, on May 25, one of President Jair Bolsonaro's sons, councilman Carlos Bolsonaro in Rio de Janeiro, pointing him as one of the chiefs of a criminal organization in the South American country devoted to spreading fake news, since the 2018 presidential campaign to date.

Carlos Bolsonaro's criminal activities include, according to investigations, long ago well-known among Brazilians, threats against his father's political opponents. The Bolsonaros are suspected by some of having killed Marielle Franco in March of 2018, then-councilwoman in Rio de Janeiro.

Brazilian jurists have said that the election won by Mr. Bolsonaro could be revoked, and there could have been new elections without the current president.

"The Brazilian situation is particularly worsened by the very low legitimacy of the present government - Bolsonaro was elected because Lula, who was widely favorite, was conveniently jailed for the time of the election, based on absurd corruption charges - and instead of uniting the country to fight the virus, the government authorities are fighting each other," observed Doctor Dowbor.