Outdated US bombers asking for trouble

The flights of US strategic bombers over the Black Sea near the Crimean Peninsula did not go unnoticed. The Drive wrote on June 1 that B1-B bombers, which flew near Russia's borders, "can pose a serious problem for the Russian fleet." 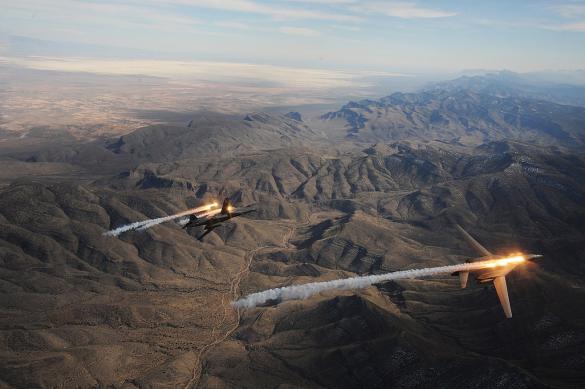 Such a bombastic declaration suggests that it goes about some kind of state-of-the-art aircraft that suddenly came to replace the good old B-52s. Indeed, a closer look at the technical specifications of this miracle of modern technology produces quite an impression.

The B1-B manufacturing company, Rockwell International, reports about numerous records of its aircraft, while independent experts talk about more than 60 records in speed, altitude, load capacity, flight range and other performance characteristics.

This is a fast and partially stealthy, swing-wing bomber, which means that the aircraft is highly maneuverable.

It would seem that B1-B bombers can be a serious problem indeed. However, suffice it to say that the Russian military have been familiar with this miracle of American genius since the days of the USSR. The bomber entered service in 1985, while its original version, the B1-A, was passed into service in 1970. Therefore, this is not a new plane at all, which is a very important detail to the story.

The purpose of the B1-B, inter alia, is to break through low-altitude air defenses. If Russia had not had newer developments, the US bomber would have become a problem not only for Black Sea or Baltic fleets, but also for Russia in principle.

However, Russia has a 2007 development called the S-400 Triumf, a powerful air defense system.

According to Western military analysts, the S-400, along with systems such as Iskander and coastal anti-ship systems of the Bastion class, plays a key role in the new concept of the Russian Armed Forces, known in the West as "anti-access/area denial" zone, which means that NATO troops will not be able to either stay or move within the range of such systems without the risk of suffering irreparable damage.

Russia's S-400s can show destructive counteraction to B1-B bombers. These bombers can cause damage not only to Russian naval ships, but they, being strategic aircraft, launch a nuclear-capable missile. Therefore, Russia has S-400 systems along the borders in the Crimea and the Kaliningrad enclave.

However, it would be too premature to say that those bombers pose no threat: they carry AGM-158C Long Range Anti-Ship Missiles.

According to Ilya Kramnik, an expert with the Russian Council for Foreign Affairs, this is a very serious problem due to the tactical and technical characteristics of those missiles, primarily in terms of their range and stealthiness.

"Two of such aircraft can launch 48 JASSM-ER missiles at distances of almost 1,000 kilometers. Of course, they can be intercepted, but these are not easy targets to destroy, and even powerful air defense systems will not be able to give an absolute guarantee at this point. Given the small size of Russia's Black Sea Fleet, this is a serious and powerful threat."

"We knew even without the demonstration of force that the United States had an impressive military potential, but I want to note here that in the event of a threat to our national security, neither fighter escorts nor anti-ship missiles will help American bombers. We simply will not let them get closer to the launch distance."

The story about the maneuvers of American bombers over the Black Sea on May 29 of this year is indicative in this respect. Russia promptly detected them and sent two Su-27P and Su-30SM fighters to monitor.

The Russian fighters were escorting the American B1-B until they changed their course. The Russian side showed a prompt response at the very early stage of the potential threat.