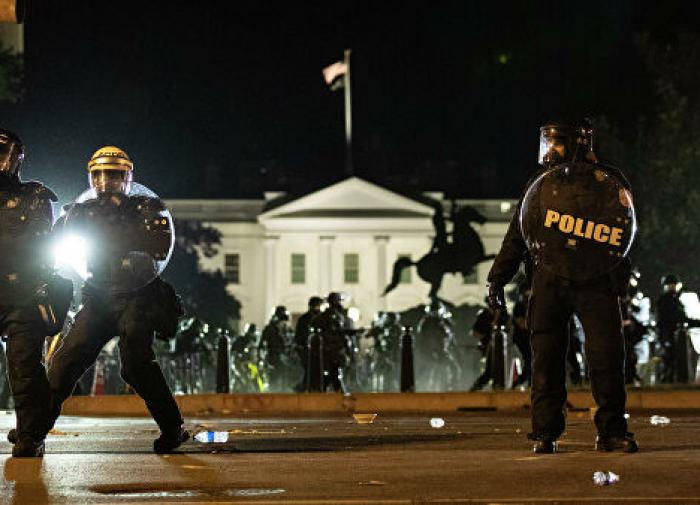 The clashes with law-enforcers were most violent in Portland and Seattle, but there were also intense clashes in Los Angeles, New York and Oakland. Riots start spreading in Texas, where a protester was killed on Sunday.

People mostly protest against Donald Trump's decision to involve the federal police in the suppression of the riots. A column of 2,500 African-Americans marched in Louisville, Kentucky, wearing hoods and wielding rifles.

"We're not here to cause chaos. There have been rumors we're coming to hunt people down. Again we are simply exercising our constitutional rights to assemble and bear arms," NFAC (Not F ** king Around Coalition) founder John Fitzgerald Johnson said in an interview with 6WBRC.

Another column of armed people - white Americans - marched along another street of the same city. They did not break the law either,  because the Second Amendment to the Constitution of the United States of America reads:

"A well regulated Militia, being necessary to the security of a free State, the right of the people to keep and bear Arms, shall not be infringed."

Historically, it was assumed that it is the appetites of the federal government that should be limited.

Portland does not think to give up

The radical protests in Portland have been getting increasingly violent. Antifa activists set fire to the police union building and tried to do the same to the federal courthouse all week, although to no avail.

Donald Trump sent federal forces to Oregon against the will of the local authorities. Similar missions are to be sent to Chicago, New York, Baltimore, Detroit and Philadelphia.

In Seattle, Washington, the radical left protested against the liquidation of the "communist" autonomous zone (Capitol Hill Autonomous Zone). In Los Angeles, California, demonstrators tried to enter the federal courthouse (a trend, as it seems), but the authorities stopped them from achieving their goal. City Mayor, Democrat Eric Garcetti, spoke in defense of Portland on his Twitter account, expressing a protest against the appearance of federal forces there.

In Richmond, Virginia, the police used tear gas against participants of the Black Lives Matter march.

America is divided into friend or foe

Unfortunately, when citizens start dividing themselves belligerently on the basis of "friend or foe" and "we are the state" principles, one can talk about the beginning of the collapse of the state. Of course, this is nothing but pure politics, because the elections are coming on November 3. Democrats want Trump out of the White House. It appears, however, that Donald Trump has very good chances to be reelected, because the "silent" white America will have its say.

Trump's possible reelection will most likely trigger disintegration into liberal and conservative states within the country. The USA will split into two states -  one with a predominance of globalist and leftist forces in power structures. They will share tolerant, liberal ideology and have a significant amount of African-Americans in the ranks of their governments.

The other state - with Trump in power - will have conservatives, right-wing Republicans and white nationalists dominating power structures. African-Americans will play a secondary role, sharing the ideology of the old American statehood.

Why is America falling apart "unfortunately?" The answer to this question is simple: the inner-American conflict will spread beyond the borders of the United States in the form of wars to other continents, regions and countries.