What is hidden behind 'no Russia in G7' rhetoric

The controversy about the resumption of Russia's participation in the summit of industrialized countries of the Group of Seven is not abating. Why is the European Union categorically opposed to the idea, while Russia does not name the real reason for this position of the EU? 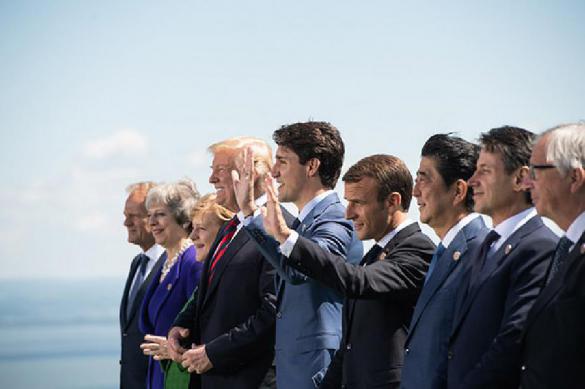 Donald Trump, being the chairman of this years G7 summit, stated a while back that it would be reasonable to invite Vladimir Putin for the talks as a half of the issues that the G& is going to discuss is related to Russia. Trump invited not only Russia to the summit, but also Australia, South Korea and India to discuss China's responsibility for the outbreak of the coronavirus pandemic. Australia and South Korea have already accepted the US invitation.

European Union is against Russia in the G7

European allies of the United States did not support the idea. French officials said that they saw no prerequisites for Russia to return to the summit so that the G8 format comes back. On July 27, in an interview with the German newspaper Rheinische Post, German Foreign Minister Heiko Maas said that the reason for Russia's exclusion from the club was "the annexation of the Crimea and the invasion of eastern Ukraine."

"For the time being we have no decision on this matter, I do not see such an opportunity," Maas said.

He called on Russia to become more actively involved in the peaceful resolution of the conflict in Ukraine and acknowledged that the West also needs to work with Moscow to end the protracted wars in Libya and Syria.

EU wants to take no responsibility for Ukraine's loss of territories

Why is Europe vehemently opposed to Russia's participation in the G7? Berlin and Paris do not want to accept responsibility for the coup d'etat in Ukraine, which led to the loss of some of its territories, and place all the blame for this on Russia.

However, let us recall how the European Union promised help to ex-President of Ukraine Viktor Yanukovych in concluding agreements between him and the "opposition." Foreign Ministers of Germany and Poland, Frank-Walter Steinmeier and Radoslaw Sikorski, as well as Eric Fournier, the Head of the Continental Europe Department of the French Ministry of Foreign Affairs, acted as intermediaries in the signing of the agreement on the settlement of the political crisis in Ukraine on February 21, 2014.

The agreement provided for the withdrawal of law enforcement forces from the center of Kiev, the end of violence, the surrender of weapons by militants and re-elections to the Ukrainian parliament. Needless to say that nothing of that has ever been implemented.

The Kremlin and the Russian Foreign Ministry prefer not to remind their partners in the Minsk Accords and the Normandy format of this.

Moscow: G7 is outdated, we are happy with G20

The Kremlin says that Russia has no plans to return to the G7 adding that it is happy with G20.

"The G20 is probably better suited to modern economic realities from the point of view of centers of economic development in the world," Putin's official spokesman Dmitry Peskov told reporters. According to Peskov, the G7 lacks global significance, since it does not include China, India, Brazil, Turkey and other countries.

"Without China, it is simply impossible to discuss any ideas in the modern world. The idea of this so-called expanded G7 is wrong, because it is unclear how they are going to take China into account," he said.

"They continue to talk about the Crimea and Ukraine as a condition for the revival of the G8. Although they understand that the Crimea has returned to Russia forever, and the settlement of the crisis in the southeast of Ukraine is a matter that Ukraine should decide itself. Russia does not need to return to outdated formats of international discussions," wrote Medvedev.

The Russian world is just words, not politics

Of course, the question arises as to why Russian politicians prefer not to hold Europe to account. The answer is simple. According to Russian Foreign Minister Sergei Lavrov, Moscow agreed to recognize the legitimacy of Petro Poroshenko, because Berlin and Paris had asked for it.

When asked whether Moscow could come up with a statement not to recognize the results of the presidential election in Ukraine in 2014, he recalled that the opposition that seized power in the country had forgotten about all the earlier reached agreements, and the requirements that the new leadership put forward to the Russian-speaking minority triggered "very serious problems."

"Against such a background, when they started nominating candidates for the presidential election, Ukrainian President Poroshenko would declare at every corner that he was the "president of peace" who would settle the conflict down in two or three weeks. That is why Paris and Berlin urged us not to issue a statement on the non-recognition of the election. And so we did, we gave them a chance," the Russian minister said.

In a nutshell, Russia took into account the interests of Paris and Berlin, rather than the interests of the Russian-speaking population in Ukraine. This is something that Russia does not want to bring up very often.

It is only Donald Trump who has nothing to be ashamed of: he denies the entire legacy of Barack Obama's presidency.

The 2020 G7 summit has been postponed due to the coronavirus pandemic from June to September. The G7 was expanded due to Russia's entry in the club in 1998. After the Crimea reunited with the Russian Federation in 2014, the G8 countries refused to attend the summit in Sochi. The G7 currently includes Great Britain, Germany, Italy, Canada, France, Japan and the USA. G7 summits are held every year.